Eduweb released the iOS version of WolfQuest on September 2, 2016, for the following recommended devices:

It is available on the App Store.

The app itself is freely available at no cost, with the first level of the game (Amethyst Mountain) and basic wolf customizations unlocked. Players can purchase the complete game (which includes episode 2, multiplayer, the Lost River map) and customization packs from a "Shop" panel within the game. Revenues from these sales help fund additional development of the game, perhaps making it possible for the team to expand towards a new episode[1].

All images in this gallery are pre-release; the app is still in development with no definite release date as of yet. You can find these on this topic of the WolfQuest community forum. 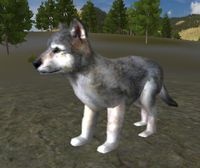 More 'fuzz' fur rendering on display with this pack teaser. 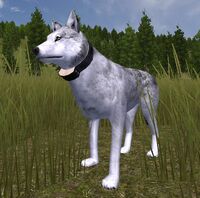 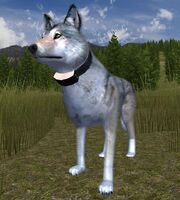 Coat Pack 1 - based on the Lamar Canyon Pack[2]

All coats as shown in a poll to decide the "Life is Rough" pack, also showcasing some model improvements. 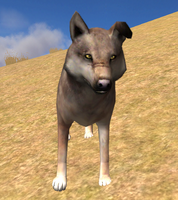 Nose scar for the Life is Rough Pack, as teased here.

Sneak peek at the Life is Rough Pack.[5] 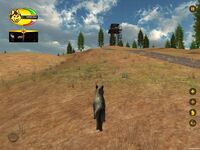 Limpy
A wolf customization with an injured rear leg.[7]

Teaser of the mobile version, plus a new entity to be released in 2.7.2.
Add a photo to this gallery

Note that only one of the three "mark territory" buttons will be used in the final version[8].

In-app purchases, or IAP, grant optional extra features that the user may opt to buy. The team may occasionally decide to develop and release new add-on content that will be available to buy once testing of new content has been completed. Content offered may be purely cosmetic, offering no in-game benefits besides vanity and appearance.

On the 28th of December 2014, Dave confirmed that in-app purchases would be available within the tablet version[9]. This is a logical decision due to the team having used their own resources to fund the app. Prices of the add-ons are currently unknown, but they will be labelled here (and in their own article as new content is released in the future.

It is very possible that revenue earned through app-related purchases will be put back into the game -- whether computer, tablet, or both isn't currently known -- over time.

The app will be supported on iPhones (iPhone 5 and newer) and iPads ( iPad Air, iPad Mini 2, and more recent models)[10].